Hazeland first appears as “Haselholt” meaning Hazel Wood in the 13th century when it was part of the extensive landholdings of the monks of Malmesbury Abbey. After the Dissolution of the Monastries, Hazeland Mill, a number of other mills and numerous manors and farms were acquired by Sir Edward Bayntun of Bromham in 1540. Sir Edward was a soldier and a courtier who used his close relationship with Henry VIII to accumulate significant landholdings in Wiltshire.

Hazeland would have been a small part of the Bayntun estates, tenanted by a series of millers including Robert May, John Flower, John Webb, Henry Morris and Walter Webb at an annual rent of around £20. The Lansdowne family acquired Hazeland as part of their purchase of Bremhill Manor and related holdings in the mid 18th century. In the 20th century, in common with many other landholdings, it was sold off as a separate property.

Hazeland was one of a series of working mills on the River Marden which runs into the River Avon. Each mill would store a head of water, operate its mill and then release the water to the next mill downstream - Hazeland Mill was known as a “mid-day mill”. It was recorded as a grist (corn and flour) and tucking (cloth) mill in 1534, and remained in use as a cloth mill until the 1830s and as a grist mill until the 1960s.

Woollen cloth manufacture took place in the parish of Bremhill from at least the 12th century when a cloth mill was listed at Stanley Abbey. This production was organised by local clothiers who used outworkers to spin the wool into yarn and to weave the yarn into cloth. After production, the woven cloth was taken to a local fulling mill to finish, before the clothier arranged for its sale, usually in the markets of London.

Fulling is the process by which fabric was shrunk and thickened. It was the only aspect of manufacture which was mechanised, and it took place at several local water-powered mills, including Hazeland. When cloth arrived at the mill, it was scoured and cleaned to remove oils. The cloth was then beaten with wooden hammers - called fulling stocks - which were driven by the water. After this process the material was taken outside the mill, where it was stretched on great frames known as tenters, to which it is attached by tenterhooks. It is from this process that the phrase “being on tenterhooks” is derived, as meaning to be held in suspense.

A 17th century document describes Hazeland Mill as having three bays, two of them lofted over and containing a grist mill and two pairs of fulling stocks. There were five drying racks suggesting that a fair amount of cloth was produced.

Government returns in the early 18th century show Hazeland to have been the most productive of the four local mills involved in cloth production, finishing cloth on behalf of five clothiers - Goldney, Farr, Turnford, Nayes and Figgins. The miller at Hazeland at that time was Peter Lane, who did well from the cloth trade, as on his death in 1748, he left a good-sized estate which included bonds, securities, capital and several cottages in Calne.

There seems to have been a contraction in cloth production as the 18th century progressed, probably driven by the continuing use of water power when the competing Yorkshire mills began to use the new steam technology. Such industrialisation proved unstoppable, and led to the demise of Bremhill cloth production.

Hazeland Mill stopped cloth production around 1838, at the time when The Devizes & Wiltshire Gazette reported a ‘daring burglary':

“On Saturday evening last the cloth mill at Hazeland near Calne was broken into and upwards of 90 yards of cassimeres and two pieces of oil soap stolen therefrom, the property of Joseph Bailey & Co at Calne. The mill is situated about two and a quarter miles from the town. Part of the mill is inhabited, but so dexterous were the burglars in performing their task, that neither the mill man nor his wife heard them.”

After the end of cloth production, the operation at Hazeland was adapted and it reverted to milling grain and continued to do so into the 20th century. No doubt the mill benefitted from being close to the transport infrastructure that was developed during the 19th century, with improved roads, a branch of the Wilts and Berks canal, and the railway line coming nearby. Remnants of the canal can still be seen, and the old railway line is now a cycle path in the wood below the mill.

A two storey building can be seen from the roadside, but the building actually consists of three storeys from the front. A photograph taken by William Fox Talbot in the 1800's (Right) shows the mill with a fourth level used probably to unload the corn from carts for milling. The mill was built of local rubble stone from Nash Hill, and there are three clearly different phases of construction as it grew in significance.

Restoration started in 1985 by its current owners but took nearly 20 years to complete, with the 60ft three storey front wall needing to be completely rebuilt as it was collapsing. The restoration kept many of the original features such as the main mill workings (a water turbine driven mechanism, the principle of which dates back to the mills developed by the Romans), the mill race and millstones. The old pig sty and stables became an office for the house and the old grain store a cottage.

Having been an important part of the local social and economic community in its long life as a working mill, Hazeland Mill now has a new life as a family home and the setting for a number of fundraising events for charities such as the Wiltshire Bobby Van Trust. 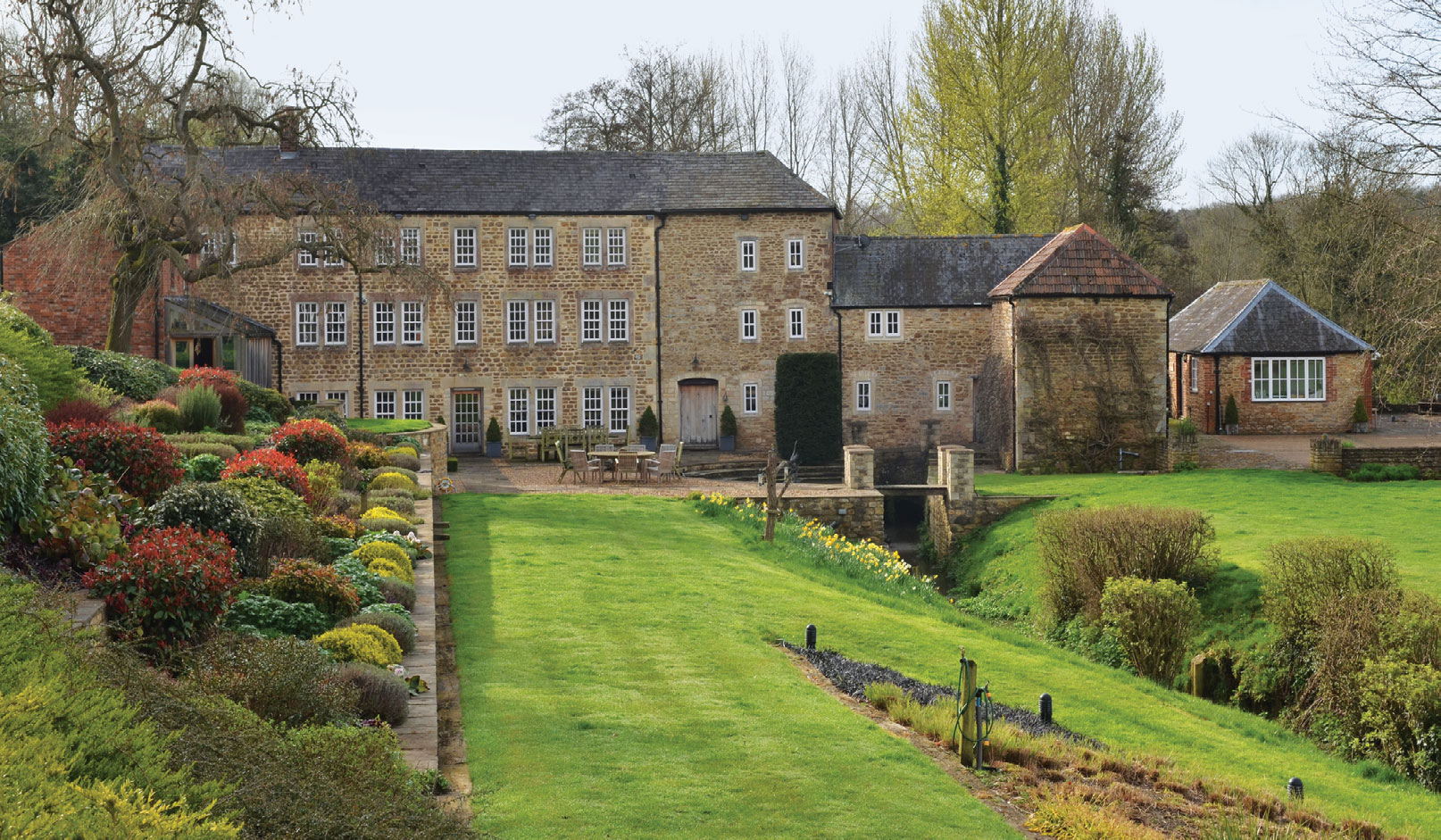 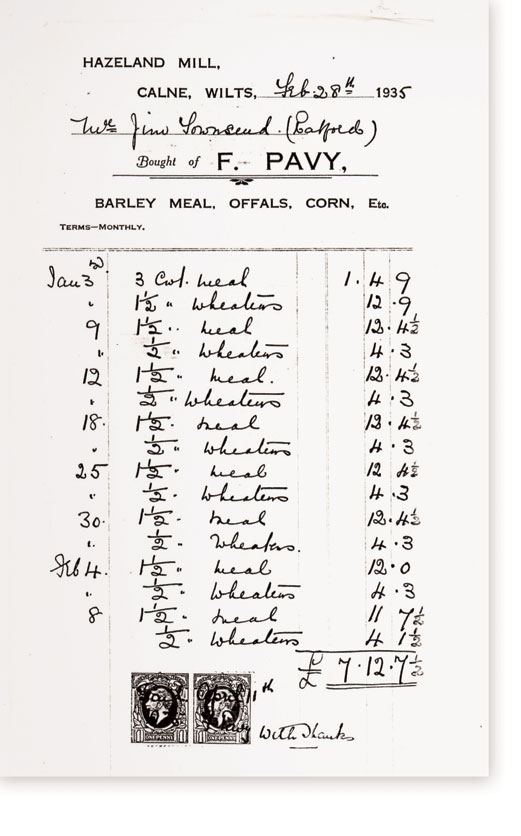 Hazeland Hatches over the River Marden in 1930 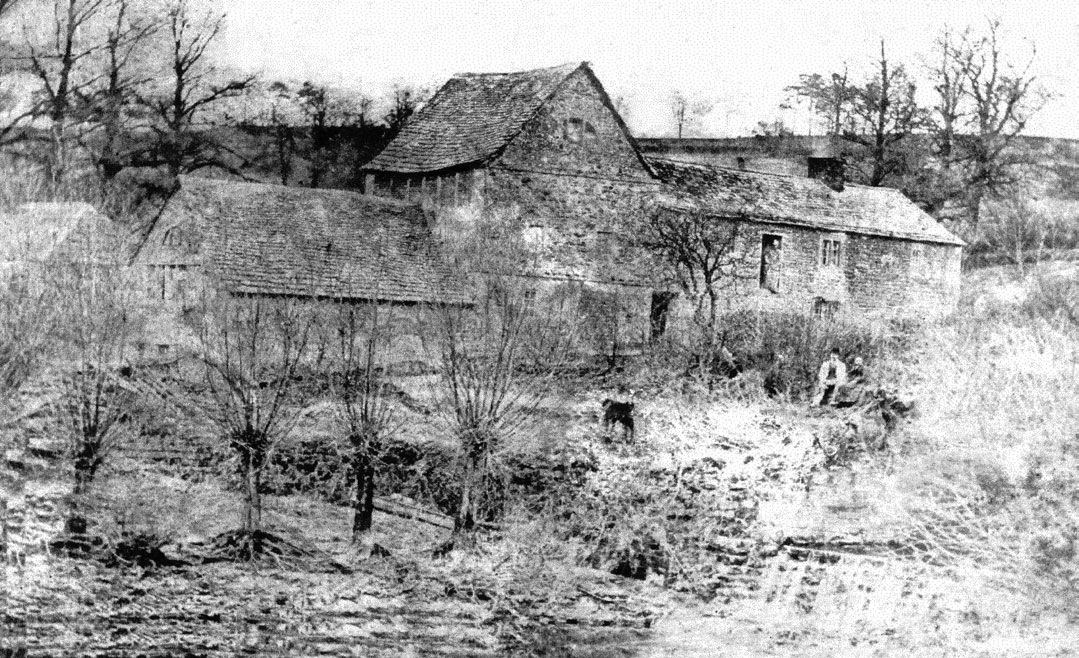