Branch line to Calne from Chippenham

The branch line to Calne from the G.W.R. mainline at Chippenham stemmed from a public meeting in Calne Town Hall on 8th November 1859. Half of the £26,663 capital required was subscribed by the Harris family. James Baird Burke was appointed engineer but was succeeded by his assistant James Samuel on account of the project being underfunded by £7,000. The first sod of the Calne Railway was turned in J. Angell’s field at Studley on 25th June 1861.

A bed of quality stone was quarried for the bridges, ballast and roads from the lands of Benjamin Bailey, a Calne corn merchant. A Brunel style timber viaduct was constructed over the River Avon and the tracks were laid to the latter’s broad gauge of 7’ 1/4”. Conversion to standard gauge (4’ 8½”) took place in 1874 and the replacement of the Avon bridge by a steel structure in 1920. The widths of the overbridges which remain today at Stanley, Studley and Hazeland clearly reflect space to accommodate a single broad gauge track. A few portions of Brunel’s bridge rail track can also be seen as supports in the former line side fencing.

Only after three inspections for the Board of Trade by Captain Tyler of the Royal Engineers was the line deemed fit for safe public travel. It opened on 29th October 1863 for goods traffic and for passenger services on 3rd November following. Trains were operated on behalf of the Calne Railway following an agreement with the G.W.R. until an Act of Parliament of 1893 ruled that the two companies were to amalgamate.

Thus it was under the aegis of the G.W.R that Stanley Bridge Halt was opened on 3rd April 1905. Previously, in March 1888 the G.W.R. had proposed a station and goods facilities at Hazeland and the M.P. for Chippenham, Sir Gabriel Goldney, had offered to finance similar facilities at Stanley.

Apart from milk traffic conveyed in mixed trains the passenger traffic at Stanley Halt was first served by newly introduced steam rail cars in which the locomotive was located within the carriage with a vertical boiler. The ever publicity conscious, G.W.R. issued the photograph below with a clientele of smartly-attired Edwardians waiting to board the train.

The unstaffed halt comprised corrugated iron pagoda style shelter and a timber shed through the rear of which milk churns were unloaded from farm carts arriving from Tytherton, Bremhill and Stanley. This facility was removed in the late 1940s with the advent of road transport directly to the Nestle factory in Chippenham. The platform was constructed on a timber frame, later infilled with ballast. Lighting was provided from three copper oil lamps, which were supplied from a corrugated store shed at the Calne end of the platform. A fourth lamp inside the pagoda was unused and provided a regular nesting place for blackbirds.

By 1932 the steam rail cars had been succeeded by ‘push and pull’ trains comprising one or two ample carriages powered by a smart 0-4-2 tank locomotive evolved from an earlier design. In the journey from Chippenham to Calne driver and fireman controlled the engine from the footplate as usual, but for the return journey the driver controlled the locomotive from a compartment in the leading carriage via a remote control system of rods and levers, the fireman remained in charge of the needs of the locomotive. Hence they became known as ‘push and pull’ auto cars.

For some return journeys the locomotive was in the centre of a mixed train after vans containing Harris’s pork products destined for many distant locations were attached at Calne. Not all of the passenger services began and concluded their journeys at Chippenham. There were also through services to Calne from Westbury, Melksham, Trowbridge and Bath. During summer months a Saturdays only direct service to Weston-super-Mare left Calne at 1.12pm.

The line provided more than a local personal and commercial service during the 1939-45 conflict, serving the needs of the R.A.F. Camp at Yatesbury and transporting Army vehicles and equipment from the Salisbury Plain. With post war the closure of the Yatesbury camp and the increasing use of road transport and delivery by Harris’s, the revenue generated by the line was significantly reduced.

The closure of the line

Notwithstanding the introduction of Diesel Multiple Units for most of the passenger services in 1959, heavy snowfalls during the severe winter of 1962-3 saw periods of return to steam hauled trains.

However, the invidious Marples - Beeching rationalisation of British Railways followed in the mid-1960s (ironically to be implemented by Fraser, the Wilson government Transport Secretary) and led to a calculated run down of the line, leading to its total closure on 18th September 1965, notwithstanding considerable local protests via the largely cosmetic and inert Transport Users Consultative Committee. It was sinister that the statistics of passenger numbers relied on data from a summer period when the regular commuters to the Westinghouse factory in Chippenham were on holiday.

The last train left Calne to a fusillade of 101 detonators, one for each year of the line’s existence. A final act of defiance was the temporary immobilisation of the train by an activation of the emergency communication cord at the junction with the main line at Chippenham. The track was not lifted until 1967.

Apart from an unfortunate gap on the very site of Stanley Bridge Halt, the track bed first became a Nature Trail and subsequently, a facility for cyclists, runners, walkers and dog owners. 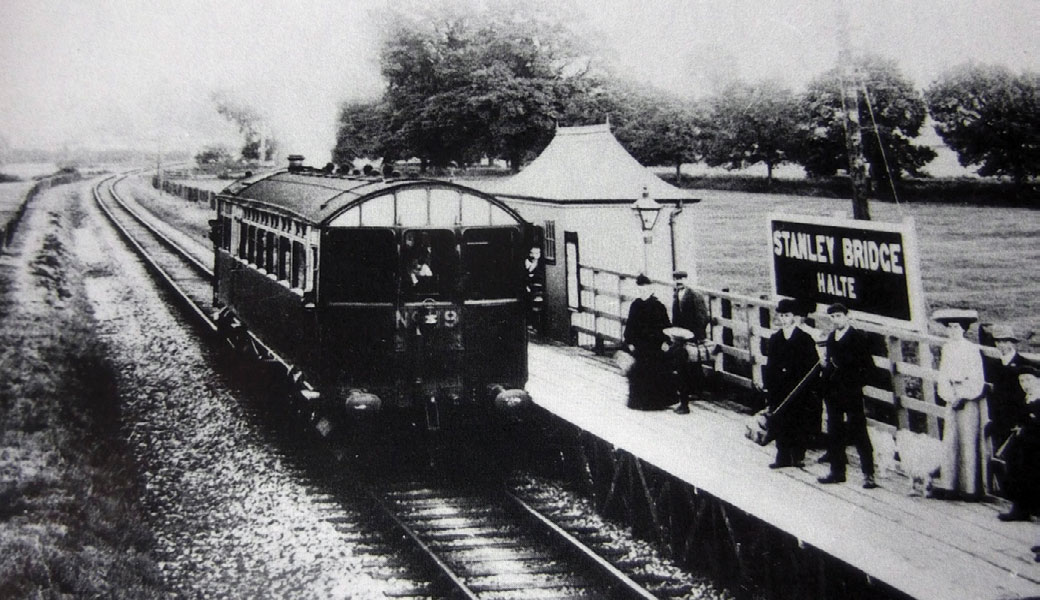 A G.W.R. publicity photograph at the opening of Stanley Bridge Halt 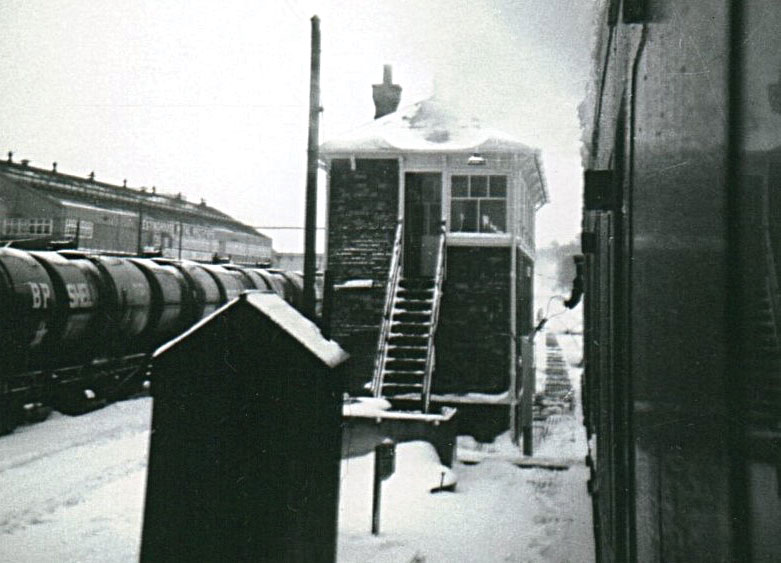 Token exchange at the Chippenham East signal box in the snow 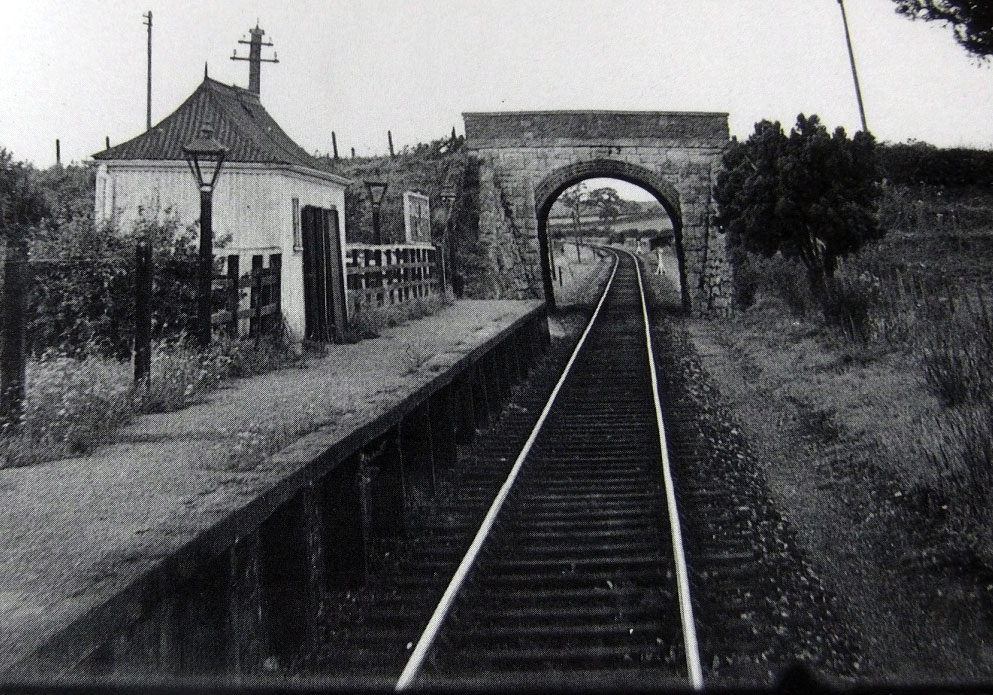